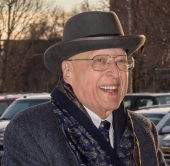 With deep sadness we announce the recent death of Joseph Byron Yount III, familiarly known to Byronists worldwide as J. B., on October 2, 2016.

Over a quarter of a century ago J. B., always interested in the poet whose name he shared, contacted Jerome McGann with a scholarly question. “There’s a Byron Society, and you should join it,” Jerry advised.  J. B. joined, and for decades he enriched Byronworld with his distinctive presence. J. B. attended international Byron conferences in Nottingham, Prague, Venice, Boston/New York/ Newark DE, St. Andrews, and Versailles.

He served as President of the Byron Society of America, where his legal counsel proved invaluable as the BSA moved its collection of books and other Byroniana to its present home at Drew University. J. B. entertained and edified many Byronists who visited him over more than two decades. His hospitality was lavish, his knowledge of Virginia history extensive, and his smoothly guided tour of Jeffersonian Virginia ranging from Charlottesville to Monticello, Barboursville, Montpelier, Ash Lawn, and Poplar Forest, unforgettable.

J. B. was the proud descendant of two old Shenandoah Valley families and a lifelong resident of Waynesboro Virginia.  He was a partner in the Edmunds, Willets, Yount and Hicks law firm and was the second-youngest mayor in Waynesboro’s history. For 25 years he served as Waynesboro’s city attorney, acting also as city planner for much of that time. Well-known as a local historian and lecturer, JB was a pillar of many institutions besides the BSA, among them the Augusta County Historical Society, the Augusta County Bar Association, Fishburne Military School, and the University of Science and Philosophy established at nearby Swannanoa by Walter and Lao Russell. He was a faithful Presbyterian, a staunch Mason, and a fervent Wahoo, a life member of the Waynesboro NAACP and a 60-year member of Farmington Country Club outside Charlottesville. J. B. was a reader, a collector, and a superb raconteur (to experience his mellifluous cadences, read a few paragraphs of Remembered for Love, his biography of Lao Russell), a Virginia gentleman and a citizen of the world—and, like Byron, a profound, amused student of human nature in all its complexity.  As Marsha Manns, founder of the BSA, fondly recalls, J. B.  “could see through anything--could politic intensely to accomplish a good end and yet have everyone think the world of him. He accomplished more in one lifetime than seems possible and yet he never wearied.”

J. B.’s many friends, in Byron circles and beyond, will miss his warmth, wisdom, generosity, and goodness—and his stories.