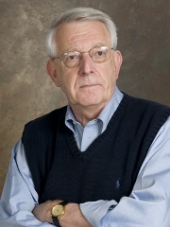 With deep sorrow we announce the death of Charles E. Robinson, admired and loved by his many students and by scholars of Byron and Romanticism worldwide, on November 20, 2016.

A graduate of Mount Saint Mary’s College in Maryland, Charlie earned his Ph.D. from Temple University under the guidance of the great David V. Erdman. In 1965, Charlie joined the English Department at the University of Delaware, where he remained for his entire career and where, after 1990, he was joined by the influential Shelley editor Donald H. Reiman. At Delaware, Charlie served as Director of Graduate Studies in English from 1981 to 1993. He also served for two decades on the editorial board for the University of Delaware Press.

As a scholar, Charlie was deeply dedicated to Byron studies. His first presentation at the Denver MLA in 1969 focused on Byron’s The Deformed Transformed, a paper later incorporated into his first book, Byron and Shelley: The Snake and Eagle Wreathed in Fight (Johns Hopkins, 1976). The fruits of vast reading, thorough archival research, and lively collaboration with colleagues, Charlie’s scholarship hugely expanded our knowledge of the Byron-Shelley circle. Building on his Mary Shelley Reader (edited with Betty T. Bennett; Oxford, 1990), Charlie transformed Mary Shelley scholarship with his Frankenstein Notebooks (Garland, 1996), an edition recently reissued by Routledge. Charlie also co-edited Liberty and Poetic License: New Essays on Byron (with Bernard Beatty and Tony Howe; Liverpool, 2008) and published The Original Frankenstein (Random House, 2009). At his death, Charlie was preparing a new edition of Hazlitt’s letters and a biography of Shelley’s publisher, Charles Ollier. Early, late, completed, and unfinished—these works reflect the wit, acuteness, and effervescence that Charlie himself embodied.

Charlie’s service to the Byron Society was long and enthusiastic. From promoting the fledgling Byron Society in the early 1970s to hosting the Leslie A. Marchand Lecture Series at Delaware in the 2000s, Charlie dedicated enormous energy to all things Byron. He organized two international Byron conferences at Delaware, the first in 1979 on “Lord Byron and His Contemporaries” and the second in 2001 on “Byron: Heritage and Legacy.” From 1996 to 2006 Charlie served as Executive Director of the Byron Society of America and co-chair of The Byron Society Collection, originally at the University of Delaware. In 2015, Charlie himself delivered the annual Marchand Lecture, speaking on the relationship of Byron and Hazlitt. Elected as Joint Treasurer of the International Association of Byron Societies in 1976, he remained on the International Byron Society board until his death. Attendees at Byron conferences in London, Athens, New York, and Moncton among other places will fondly recall Charlie’s lectures, in which his many jokes, digressions, and gesticulations entertained while his insights enlightened.

In addition to his scholarly endeavors, Charlie was a generous mentor and inspiring teacher. His graduate students, many of whom are now scholars in Romantic studies, will remember well Charlie’s office, crowded with books and redolent with the aroma of coffee; his profound and sometimes profoundly unreadable comments on dissertation chapters; and his winking confession that the grade on seminar papers sometimes depended on how many glasses of wine he’d had when reading them. Like the anxious students he initiated into the profession, whose fears he allayed and to whose job searches and cover letters he devoted weeks or months of his life, Charlie apparently never slept. His middle-of-the-night emails of encouragement or early-morning forwards of job advertisements from the Chronicle of Higher Education live in the lore of the Delaware English Department and in the memories of his grateful students. In honor of his kind and indefatigable mentoring, Charlie in 2005 received an Outstanding Advising and Mentoring Award from the University of Delaware. Charlie’s classroom exploits were no less legendary. As Marsha Manns, founder of the BSA and one of Charlie’s undergraduate students at Delaware, recalls, “Every class was an adventure, crammed full of passion and excitement; students eagerly arrived in advance of the 8:30 AM start time and lingered long after the class was over to talk with Charlie. His own enthusiasms for our poets and for his students completely filled the classroom with anticipation.” All of Charlie’s students report similar experiences, though each anecdote is unique. To collect the stories of Charlie’s humor and humanity would require a very long volume.

Charlie leaves behind his wife, Nanette, who was his traveling companion on many Byron-related conferences and adventures, his son John, and his daughter Clare. Charlie will be remembered for his Catholic faith, his service to the community of Arden, his lessons on poetry and meter for high school students in Wilmington, Delaware, and his wry replies to detractors of his beloved West Virginia, both the state and the Mountaineer basketball team. His family, friends, and students will miss his generosity, energy, and passionate inquiries relating to Byron, Mary Shelley, and beyond.