for the 46th International Byron Conference in Thessaloniki, Greece

We are happy to announce the new dates for the 46th International Byron Conference which was postponed due to covid-19 concerns. The conference will coincide with the 200th Anniversary of the Greek War of Independence of 1821, a landmark event that will be celebrated throughout the country.

Please note that the Call for Papers has opened again. The new deadline for abstracts is 31 January 2021. The exact format of the conference will be decided in the next few months and relevant information will be posted on the conference website as we go forward.

Delegates who had their proposals accepted are kindly requested to confirm their intention to participate by 31 January 2021 to our dedicated email address: This email address is being protected from spambots. You need JavaScript enabled to view it.

We very much hope that you will join us for this rescheduled event!

More information can be found on the official site http://www.new.enl.auth.gr/ibc2021/ 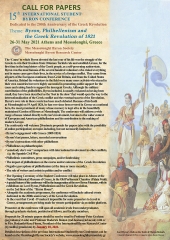 Dedicated to the 200th Anniversary of the Greek Revolution

Theme: Byron, Philhellenism and the Greek Revolution of 1821

The 46th IABS Conference postponed to 2021 over coronavirus concerns

We regret to announce that it has been necessary to postpone the 46th International Byron Conference in Thessaloniki scheduled for 29 June-5 July 2020 as part of measures related to COVID-19.

We hope that it will be possible to run the conference in late June/early July 2021.

The new dates will be announced in September. 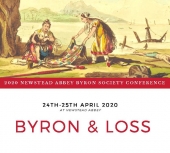 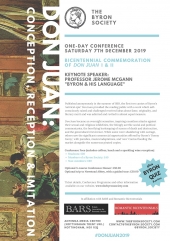