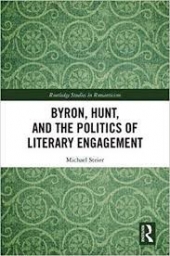 This study will provide an invaluable resource to Byron scholars as much as Hunt scholars.

In the words of the award committee, the book "charts the sometimes rivalrous and sometimes collaborative relationship from Byron and Hunt's earliest days of juvenilia and literary satire, to their radical political crusades, Italophile poetics and founding of a journal. It demonstrates unequivocally that the friendship between Byron and Hunt has been previously underestimated and oversimplified. An assured performance, this is a hugely enjoyable book…

This monograph will become the reference book on the Hunt/Byron connection, as well as a very useful resource on Byron generally, and on a large cast of figures, coteries, and literary-cultural phenomena from the 1810s to the 1820s."

This book explores the amorphous, fragmented and digressive world of George Gordon Byron’s poetic works, which are pervaded by the themes of change, mutability, deformation and transgression, often presented or described as madness. The blurring of the border between fiction and reality is a matter of the author’s decisions concerning both his life and his texts, and a conscious process of construction and self-fashioning. It is also a recurring epistemological theme in Byron’s works, which make take the form of narrative dis-orientation and the dismantling of easy cultural pre-conceptions. The Authors study Byron’s artistic quixotism and his pursuit of creative freedom which reveals itself in the Romantic irony, digressiveness and self-awareness of his writings. 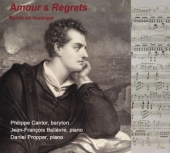 You participated in the International Byron Conference these last years or were in touch with me for any other reason related to Byron. I had the privilege to present my research about "Byron at the keyboard" (Tbilisi, 2014); the Byron concert at the Institut Hongrois in Paris, during the 2016 Byron conference; my further research in Mazeppa set to music (Yerevan, 2017), and Byron's influence on music writing (Ravenna, 2018).

The July 2016 concert was welcomed with such an enthusiasm and earned the musicians such a success that I decided to extend its reach by organising a studio recording of the programme and by writing substantial presentation notes about the composers and their works.

On Saturday, October 19, the conference convenes at the Chicago History Museum, on North and Clark.

Romanticists all over the world will be dismayed to learn that Rolf Peter Lessenich passed away suddenly in early February 2019.

Although he was approaching 80, he was still an indefatigable and prolific writer on a wide range of comparative literature, from the Classical tradition of Dryden and Pope to Romanticism and late Victorian decadence.

His well-meaning, erudite and ever-supportive voice will be sorely missed by his students, colleagues, friends and all those who had the privilege of being taught by him. And even if “poetry makes nothing happen,” as Auden was to write in his lament for Yeats’s death, Rolf Lessenich’s lectures, essays and books about literature have amply contributed to the knowledge, education and happiness of his ever-grateful students and friends.