Byron and the Regency 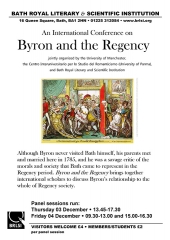 Although Byron never visited Bath himself, his parents met and married here in 1785, and he was a savage critic of the morals and society that Bath came to represent in the Regency period. 'Byron and the Regency' brings together international scholars to discuss Byron’s relationship to the whole of Regency society.

For details of the programme, please see http://brlsi.org/sites/all/files/site/December%20Calendar%202%202015.pdf

All are very welcome (the fee for each panel session is £4, students £2), and no advance registration is required.

For any further information please contact Dr Steve Wharton (This email address is being protected from spambots. You need JavaScript enabled to view it.).

On this spot was Christos Kapsalis house in which Byron stayed from 5 of January until 19 of April 1824 where he breathed his last.

Christos Kapsalis blew up his house the night of the EXODUS of 10 Apri1826 including wounded men, women and children, not to be captured by the Turks.

In 1924 the University of Athens honoured the centennial of Byron’s death by erecting a commemorative marble column, work of the sculptor Antonios Sochos.

The memorial marble column placed on the site is located in a peaceful and sunny section of Messolonghi and has been completely renovated in May 2015 to include new garden spaces, a resurfaced granit pavement, lighting, and handsome iron grillwork and gates with funds offered by the Messolonghi Byron Society and Byronists from abroad.

Call for expressions of interest

The IABS has received the message below from John Lytton (This email address is being protected from spambots. You need JavaScript enabled to view it.).

As an IABS we encourage our membership to respond positively.

The effects of the loss of Dr Peter Cochran on 20 May 2015 on Byronists and Byron studies worldwide will be immeasurable.

Peter himself had for many years given up trying to summarise the huge range of his contributions, and his entries in the programmes for Byron events yield only bland overviews such as ‘Peter Cochran edits the works and correspondence of Byron on the International Byron Society website’ (London, 2013) and ‘Peter Cochran has written innumerable articles on Byron, edited Byron’s text for Garland and others, edits the Newstead Abbey Byron Review and is Research Fellow of the School of English of Liverpool University. He is currently working on an edition of Michael Rees’s translation of Teresa Guiccioli’s Lord Byron’s Life in Italy’ (Liverpool 2003). At Dublin in 2005 he mentioned that he had become a Senior Research Fellow at Liverpool and ‘hosts the celebrated Hobby O website’.

Last week, the world of Byron studies was shaken with the passing of Dr. Peter Cochran. Peter’s impact on generations of Byronists has been felt through seemingly encyclopedic knowledge of the works, influences, and lives of Byron and those around him, as well as his countless edited collections, monographs, and online edition of the poet’s works and letters.

The IABS wishes to extend it deepest sympathy to Peter’s family and friends, and will be posting an obituary on the IABS website in the near future.